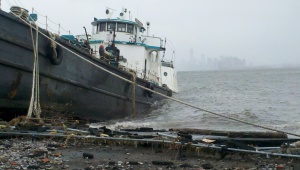 Monday night an ominous OEM alert, “shelter in place,” flashed onto my cellphone and our neighborhood’s power flickered out.  It was comforting to hear emergency sirens piercing the dark as Hurricane Sandy began pushing the Hudson River up our street.   A few blocks away an oil tanker washed ashore.  Transformers
exploded lighting the sky with strange alien flashes.  The smell of
the encroaching waters, barely 30 feet away, brought whiffs of the horror taking place all over the Eastern Seaboard.  Even though the wind had already dropped several tree

sized branches off the aged maple tree in our backyard, we wound up our flashlights and ventured onto the porch anxious to know where safety was.  It turned out to be right where we were.  Our neighbor from the large old house further down the street has a harrowing tale of walking chest high through waters that rose 5 feet in less than an hour.   Further down Staten Island along the South Shore homeowners clung to their roofs as 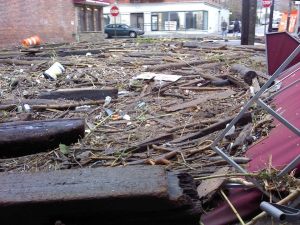 the water surged around them.  And, once again, thousands of first responders continued risking their lives to protect all of us as Hurricane Sandy ripped inland.  The debris down the street reminds us just how dangerous their jobs are. Tuesday the entire neighborhood ignored the wind and alerts to mix on Bay Street and share our relief as we “strolled” along Bay & Front Streets to survey the damage.  Shops were filled with mud and debris.  Most of all everyone wanted to have their picture taken in front of the grounded tanker.  As if by miracle the corner deli had power.  What appeared to be a long line at the check out was merely people from the projects and surrounding streets seeking a warm place to chat and eat.  My husband, Farrell, and I were the lucky ones. We had a dry home, water and gas, and were hunkering in for what promised to be a long power outage. Wednesday I spent the day preparing soup made from the last of our perishable foods. Farrell conjured up a bucket system to let us shower. Everyone seemed to be seeking some form of normalcy as children donned costumes and trick or treated.  One neighbor mowed his lawn, another swept leaves as if the ferocity of her broom strokes could erase any memory of what she barely escaped. That evening the lights came back on.  For the first time we saw the images we’d heard so eloquently described on CBS radio.  The media helps all of us come together in a national “stroll” of relief to honor the heroic rescue efforts made by the first responders we depend on during these larger than life tragedies.  But, the truth is that these same indviduals seek out ways to offer this gift every day in hospitals, EMT, nursing homes, shelters, social work services, fire houses, police departments, schools and other social service agencies too numerous to list.   Warm cyber hugs to you all.