In 2010 I posted my short documentary “Jodie’s Law” about a young woman who her family alleges committed suicide due to workplace bullying.  This is an update from her Aunt:

We have received tremendous response from your documentary both Nationally and around the world. 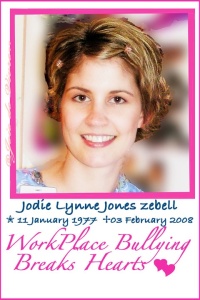 We/My family always felt if sharing the heartbreak of our family would help save one life, our efforts and Jodie’s death would not have been in vain. Having taken that step forward, has brought many to us who have told us they were prepared to take their life when they saw your documentary or read our stories, and they pulled back from the brink, saving their loved ones the pain they endured. Normally those accounts have also been accompanied with statements of renewed courage to face their situation, their bully, or find a different job.

There have also been e-mails asking to speak with me directly as they were contemplating taking their lives. With my heart in my throat, I felt I could not dial their phone numbers quickly enough. But through the mercy of God, I reached each caller, listening to the pain of their experiences and the dire choices they believed were in front of them. These callers repeatedly expressed their gratitude; but I too felt grateful, as helping is part of healing ones broken heart. Though there are times I still hold my breath when we interact, most have found their footing and belief in themselves. This does not mean there was a rosy job in front, just waiting for them. The struggles have been long and hard; but joyfully many have gone on to find new and fulfilling careers. For those who continue to struggle, I remind them they are the heros, for they are survivors; as well as hold them in my heart and prayers.

Passage of Healthy Workplace Legislation seems to drag on. Perhaps this is the way it goes when trying to pass a law. I admit I am still a novice to the roll of Citizen Lobbyist. The political outlook in Wisconsin has been very dire. Yet, State Representative Kelda Roys, and Senator Jon Erpenbach, sponsors of the Wisconsin bill, assure me that Jodie’s Law (as we like to call it) has not been lost on them; they are simply waiting for a more favorable political climate.

We, as a family find it discouraging that many working on the legislation insist on calling it a Healthy Workplace Bill as opposed to an Anti-Bullying bill. We think there has been so much news in the media about bullying, that it should no longer be considered an aggressive term when working for a law against it in the workplace. There are few people who are not familiar with the term Bullying when it comes to schools and young people, as the numerous pieces of legislation indicate. Also the idea that the law would have to prove malice seems unacceptable. It is not required in other protected status laws, so it does not seem wise to set a precedent now.

Also, we would like to see a tougher stance to adding some financial teeth if employer negligence is found. I/we have not given up on these bills. We write, call, sign petitions, and anything else we can feasibly do to help them along. I try to keep up with all that is posted on Facebook, writing responses, opinions, bringing up Jodie’s story, etc. and always including the link to your documentary. We are in the process of having a brochure of Jodie’s story printed so we may easily hand it out when people ask about our button that we still wear with Jodie’s picture & caption Workplace Bullying Breaks Hearts

I am chagrined there are times it all gets to be too much for me and my spirit sags and I find myself on the verge of days of depression. Jodie’s Mom encourages me to take a break from it all for now, or maybe for always, as she says Jodie would be proud of what I have accomplished and she would not want to see me ruin my health or lose the joy of life. So I have been giving myself permission to do just that.

We sisters have talked some about focusing our work towards the children and teens anti-bullying issues. Perhaps developing a program geared towards talking with children and teens, as well as parents, teachers, administrative leaders, as well as school boards and city/county board members. Jodie was a leading member of DECA in her high school and we feel the DECA program would be a good place to start. This is all in the talking stages for us, put we do feel at times our efforts would be better spent in that direction. Many States have passed Anti Bullying laws for children and schools, so we may have a better foot in the door. Growing our citizens of tomorrow with an understanding of the damage caused bullying and the benefits of tolerance, may in the end bring the best results. Hopefully their parents would be learning right along with the kids, and then start to stand up for their own rights in the workplace as well.

We have been appalled at the number of suicides among young peopled. In Wisconsin a teen attempted set himself on fire, and in Minnesota two middle-school girls made a suicide pact and hung themselves, all due to bullying. Jodie’s daughter is now 10 years old. These stories have scared me to death! Over dinner I spoke with our little girl about what they are taught in school about bullying. It seems it is discussed frequently, as she had a lot to tell me. I also gave her a book about bullying published by the American Doll company. Because she has a very active 6 year old brother, we never got a chance to get back to the book or the subject, but at least it is a start.  We have not yet broached the subject of suicide. It seems like such a cruel topic to confront and we have not had the right moment to talk with her Daddy about it and what and when he thinks the subject should come up. It is still all very heartbreaking but everyone is heroically carrying on and doing what each of us can to help the other along.

Jodie’s husband is doing a great job in raising the children, though he seems to steer pretty carefully away from any serious discussions with us about Jodie, and all that has occurred, yet relations between all of us are becoming more comfortable. He brought the kids to Florida for the first time since Jodie’s passing. We all went to Disney World & then spent Thanksgiving at Grandma Jean (Jodie’s Mom).

He has his hands full keeping the kids clothes clean, as well as the house, seeing their home work is done, fixing their meals, getting them to school and to bed, girl-scouts, religion classes, swimming, soccer, T-ball, and even coaching their teams. He loves the children very much. I think I can safely say they are his world, and the kids feel the same. Jodie’s daughter is very protective of her brother and watches over him and her Daddy like she is a little mother – sometimes more than either male of the house appreciates.

Grandma Jean (my sister & Jodie’s Mom)  & I had a wonderful but short visit with them in August. We spent two nights at their place, where among other things we played salon and Jodie’s daughter gave us facials and did my hair (!) and her brother painted my fingernails and make-up. I only regret we did not take pictures of the end results! We …spent lots of time with their Auntie Lisa (Jodie’s sister in your video) and a lot of time in the swimming pool. It is always hard to say goodbye.

It is important to note that no single factor leads to suicide and Jodie’s employer did not respond to an offer to participate in the documentary.